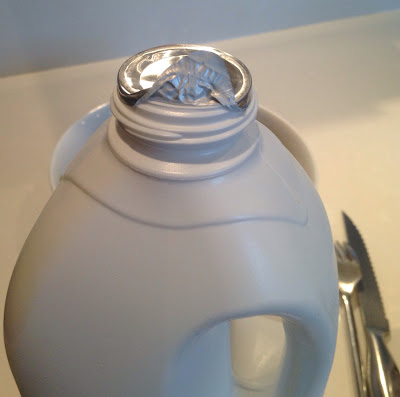 Let me get this right, I’m a grown man, reasonably fit, a grown man, mid forties and a grown man so why oh why can I not get into the bloody milk bottle?

Look at it mocking me, it took me a full two minutes to get to this stage and its barely shifted. The cap is that tightly sealed with no spare to get any kind of leverage on it, why do they do it? I get the same with jars and other bottles but what stumped me last night was a bag of crisps. Yes crisps, I know, you’re probably laughing at my puniness right now but really crisp packets are getting tougher.

When I was younger crisp packets used to come in clear cellophane, you could see the crisps which made it difficult to hide all that air in them that we are now used to and they were simple to open. Cue today’s crisps and not only can you no longer see in them but they are ‘sealed for freshness’ in slightly metallic bags that resemble little cushions. Upon opening them you are treated with a waft of crispy air and a big sense of disappointment when you realise that it’s contents have been made from exactly half a potato. It’s getting in them that’s the problem though, the new metallic bags are so tough I stood last night in the kitchen laughing at myself tugging away, it wouldn’t budge. When it eventually gave up the struggle the bag ripped at such an angle half of its contents (two crisps) stayed in the bag the rest ended up on my slippers. And yes, laugh again, I do wear slippers.

Which brings me rather untidily around to today’s blog, the rather odious theme that follows me around the country on my travels. Namely right place, wrong time.

Imagine a lovely fishing village, a sea food restaurant, one course down and about to tuck into your main course when in walks a family…

‘Looks bloody posh, I only want a pint.’

As soon as I heard that my heart sank. I glanced around the place, there were plenty of empty seats away from me and Jayne but I knew from experience that we were going to be neighbours.

Two women, a man and a boy aged around ten I would guess sat feet away at the next table and perused the menu.

‘Give over, they must do chips we are at the seaside, give it ‘ere’ said woman one.

‘Oi, waiter, got any chips?’ chirped up woman two.

‘Bleuuuughhh!!!!’ said boy as he lavishly launched a torrent of vomit across the linen table cloth.

I had just placed a morsel of the finest fish covered in a delicious sauce in my mouth and as my head was tilted in his direction I was witness to the whole process. Then the smell hit.

I didn’t know wheather to laugh, cry or create my own vomit slick. I didn’t want to spit food out for fear of wretching, I didn’t want to swallow for fear of wretching either so I remained in limbo trying to come to terms with it all and not breathe or sniff at the same time. I turned to Jayne, she was froze with the fork inches from her mouth, I knew from her look that she too didn’t know what to do next either.

‘Come on, were off, get I’m outside, it’s all that candy floss you fed him’ said man.

So by the time the waiter had shuffled over and overcome his stunnedness they had gone. When it did sink in and he thought ‘hey, I should have a word with them’ he ran out of the door only to find they had vanished into the night.

A night to remember certainly, nearly as entertaining as watching a patrons trousers catch fire one evening after entering a pub and deciding his nether regions needed warming on the open fire, or the time a young lady slipped over only to reveal a lack of underwear.

Did we finish our meal? Not really, our hearts weren’t really in it as they removed the vomit splattered cutlery and carefully folded up the table cloth, the sharp twang of bile still played with our nostrils for the rest of the evening.

Another case closes in the Smith file, sometimes its like living in a permanent sketch show.

I should really write a book…