Click the button to explore our amusing titbits or visit our main site using the links above
find me some juicy titbits
My name is Arthur Pembleton and eager Nessie hunter. After the recent photos of this elusive creature I thought it was time to open my archives and join in the discussion. The Loch Ness monster; Fact or Fiction?
After many years tracking old Nessie I can finally answer that question. Fact. Nessie is as real as you and I. To back up this startling statement here’s definitive proof; photos I have taken. They are not blurry, not amateur just professional shots taken during my Nessie hunts, let me convince you that we have a Jurassic Park right under our noses. 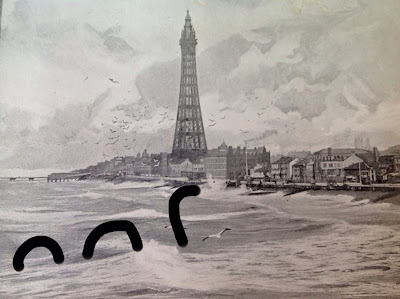 My first shot was taken in 1974, I had just been strolling down the sea front after spending a good few hours in local hostelry. I was steadying myself on the handrails near Blackpool Tower when out of the gloom I spotted something not resembling a turd. It bobbed along the top of the crashing waves and had a stench one could not describe. I had no camera, come to think of it I only had one shoe too, but that was no hindrance. Quickly I pushed a passport photograph booth and angled it towards the sea, feeding in 2p’s like they were going out of fashion the booth kicked into life and took this photo. Unfortunately the flash scared off the creature but not before I had captured Nessie’s first foray out of Scotland. I was hooked. The local police though would not allow me to use this photo or my story as defence when charging me with criminal damage to a coin operated photography booth so my Nessie photo never saw the light of day until now. 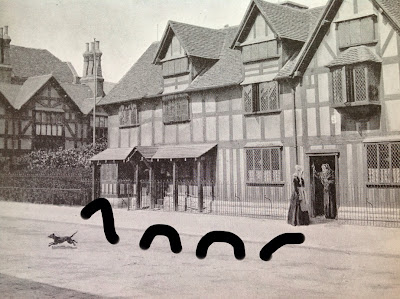 My second sighting was in 1982 and coincided with stumbling out of the Dog and Duck across from the house of William Shakespeare in Stratford Upon Avon. I couldn’t believe my eyes for there in the middle of the street was Nessie, chasing a dog! Two women looked on distraught from the house, luckily I managed to knock a Japanese tourist to the floor and grab his camera taking this remarkable picture in the process before it ate the dog and slithered away past BardsRUs and into the gift shop. I pursued the creature only to be arrested, again a conspiracy by the police did not allow me to use this photo as my defence and I spent two painful years in a small cell with a large chap called Jeffery Hardstaff. I now claim disability allowance after refusing to pick up a bar of soap. 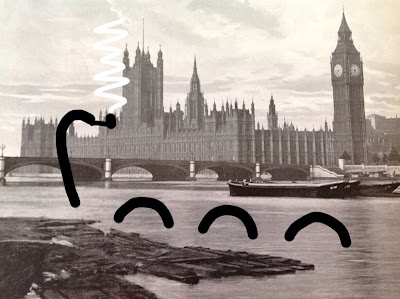 My final sighting in 1989 was the most dramatic. I was sat on the bank of the Thames in London finishing an eight pack of White Lightening when I heard and almighty splash. Looking up I didn’t see anything at first until my eyesight stopped seeing double and I gasped. For there not thirty feet in front of me was Nessie herself admiring Big Ben and smoking a pipe! I ran around screaming eventually punching a tourist to the floor and grabbed the camera, this picture is the star of my collection, the first picture I was allowed to use in my assault defence. Unfortunately my picture was discredited saying it had been to a photo shop but I can assure you I have never been to a photo shop in my life this is a 100% bonafide shot of Nessie and more convincing than the one I saw yesterday in the news.
So as you can see its all true, Nessie exists. Maybe next time you can join me on my next excursion as I try to find Nessie’s secret hideaway behind Tesco’s using only a box of twenty four cans of lager and a bottle of 20/20.
The truth is out there.