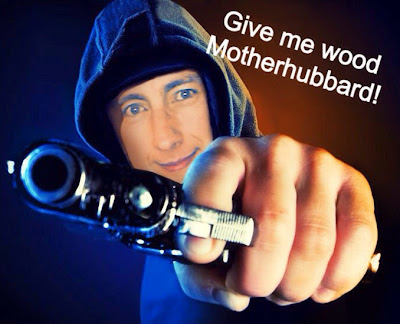 DIY stores I can cope with, just… but put me in a builders merchants or a wood merchant and it’s a whole new ball game that I don’t know the rules to.

Yesterday I needed to get some MDF boards cut to size, normally I go to the local DIY store to buy a big sheet and have it cut in three so I can fit it in the car and then cut it as I need it at home. As the DIY store will only cut to fit it in your car I stupidly I decided to see if I could have it all pre-cut to various sizes at a local wood merchants saving me a job. Little did I know that they spoke a different version of English than I do.

For a start these places intimidate me, they are used to professional tradesmen not arty farty artists so you have your card marked as soon as you walk in with your flowery clothes, secondly I don’t know the lingo. However I did find what I wanted, big sheets of MDF with a cutting price, nice.

I think I expected a ‘Can I help you?’ rather than a ‘Wha’ wan’ mate?’, I don’t respond to ‘mate’ very well as I was once compared at school to the sailor on the bubble bath bottle of ‘Matey’ and carry the scars ever since. Come to think of it he had stripes on his clothes, hmmm. Anyway, I could see by the cut of his jib that he recognised me as either a novice, a passer by that had entered the wrong shop or an idiot. He chose to believe the latter.

‘Ahem’ I cleared my throat to try and get a manly voice then said the most stupid thing possible. ‘Do you sell MDF?’, embarrassingly he pointed three feet to my right at a twenty foot long eight foot high stack of MDF with the words MDF written in two foot high letters that I had just stood and read myself before he asked me the ‘Wha’ wan’ mate?’. He sighed and I knew I was in for a rough time.

‘Well, turn it landscape and cut it into three equal sections, then from each section which should be 32” trim them to a 32” square, the remainer should be 32” x 16”, a couple though I would like trimming to 28” squares with an off-cut of 32” x 20” ‘ I felt like a pro reeling off all the sizes.

‘We don’t do landscape.’

‘Wha?’ It was my turn to shorten words.

‘We don’t do landscape mate.’ There was that word again, my gander rose a little and I imagined a little sailors cap on my head.

‘Which side?’ You are joking I said to myself along with a few choice words, I was about to explain the principles of how a rectangle can be portrait or landscape to a stranger in a wood shop who must have notice at some point that they worked with rectangles most of the day.

‘Look’ I said, ‘You see that paper in front of you, well that’s portrait, if you turn it like this…’

‘Derek! We have a trouble maker!’ For the second time in less than a minute the words you are joking rattled through my head.

Derek was a big chap, a very big chap with a small pencil behind is ear that looked so small that I immediately imagined that when he uses it he looked like he was writing with a matchstick, it was also very blunt which made me want to point it out but kept it to myself for safety reasons.

‘No problem!’ I squeaked, ‘I just want wood, have you got wood?’ I added then again regretted as the words tumbled out.

‘You’re asking me if I have wood?’ The pencil had suddenly stood on end as he formed the words and his ears moved as if emphasisng the word ‘wood’

‘Err, no, not like that, I want some MDF cutting can you do that?’

Derek signed, looked at his colleague and shook his head before turning away, another member of the human race that had me firmly classified under the drawer marked idiot.

‘Just tell me wha’ you want mate.’ That bloody word again, I punched him in the scrotum.

Only mentally, I resumed where I had left off only this time using my own bit of paper to turn slowly infront of my new enemy to demonstrate ‘landscape’, a bit like the scene in Father Ted explaining to Dougal the perspective of distance and that cows were only small because they were ‘far away’

That sorted we moved on to the next bit, how many cuts and entered a whole new world of arguing over 1/8 of an inch taking into account the cutting blade and how on each cut I will lose 1/8 of an inch. Slowly and painfully we put together a cutting chart that he has scribbled rather meanly on a small piece of paper out of reach in landscape I may hasten to add although we had agreed to disagree with his term ‘long side’ to describe it.

‘How many what?’ Legs of lamb? apples? shots of vodka? I was sure he was missing a vital bit of information.

‘How many squares?’ A strange thing to ask as we had just worked out all the cutting and on the paper not two feet away from his face was the squares all marked out. Do I do what he did with the MDF and point it out with a bored look on my face, no, instead I counted them myself.

‘Three per piece, which leaves three rectangular off cuts.’ I was going to say ‘landscape’ off cuts but I was already close to a beating.

Ok, how many?’ For the umpteenth time I rolled my eyes (when he wasn’t looking) and thought you are joking again. I refrained from listing everything in the world and offered the word ‘Squares?’ Now it was his turn to think you are joking, squares was not the answer as what he really was after was how many MDF sheets did I want cutting.

‘Five, to give me fifteen squares and fifteen off cuts.’

‘Sorry mate, we don’t do less than ten, we’re trade only.’ And with that he smiled knowing full well he had indeed won.

I picked up a price list and placed it infront of him, ‘Portrait!’ I said then turned it. ‘Landscape! Portrait! Landscape! Not bloody long side!’ and flounced out as best as I could.

And that is why I shop at my local DIY store.