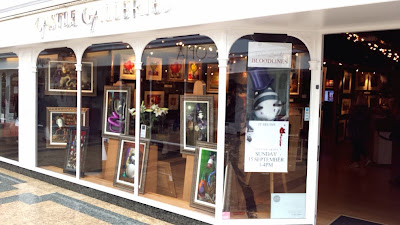 It has been a busy weekend, racking up nearly five hundred miles for two appearances but it was so worth it. Plenty of collectors turned out for both events, so many in fact that we didn’t have time to take too many photos, always a good sign that they are going well. The galleries had done a great job too, with fantastic displays of the new work and enthusiasm to boot. 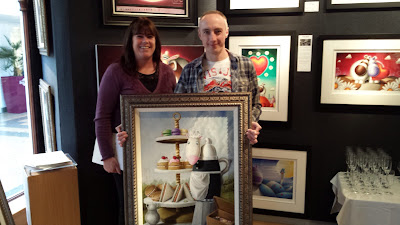 It was also nice to meet the new owner of my Picnic-a-maid and to find out that it was going to grace a stylish kitchen, so apt for such a nice piece.

As usual strange things are afoot, I have met a time traveller, no, really, its a long story and I may tell you later although I have managed to avoid having my face licked so far. Cheerless car parks are starting to become the norm and no doubt will feature heavily over the next few months in the blog as we discover some of the more seediest ones on our travels. Already we were involved in a shoplifting incident after somebody decided to snatch a pair of trainers from a shop we were passing. Out poured the security staff as the guy pushed us out of the way running. The staff were joined by several other young bystanders who wanted to ‘take him down as they could do with a fight’, they too pushed us out of the way as the merry band of pent up justice tracked down their quarry. I’ll tell you something, if they did catch him he probably had a lot more to worry about than the pair of trainers I can tell you.

‘Look, it’s not working’ is probably the last thing you want to her from a bloke stood next to you at the urinals. Keeping my head high I turned to my right, he flicked his head and repeated it again. Oh no, here we bloody go again I thought, please, I have had more toilet incidents than George Michael. Fighting the urge to look and also fighting to keep my aim whilst unable to simply walk away I squeaked ‘Not working?’ hoping it was enough and he didn’t suddenly swing around to make sure I got a good gander.

‘Its not hot, not been hot for weeks now.’ For flips sake, leave me alone, I don’t want to pass judgement on your neither regions as to if they are hot or not. Anyway what makes them hot or not. ‘Ermmm…’ I eloquently mumbled unsure what to do next. Do I peek and just make something up or do I risk just walking away and if I do his he going to swing around to give me a full blast of his hot or nots?

Just as the decision was forming he added ‘The taps. Not been hot for weeks now how do they expect you to wash your hands’ and in one blow I relaxed not realising how tense I had become. See, I nearly ended up with an inadvertent incident and its only the first weekend, lord knows what we have got coming up!